Yesterday was the first time I went out in kimono in public! Very exciting, but luckily Misuchi went with us, so it wasn't scary at all. We went to a concert of Dadada-Dan Tenko in the theatre, and if you have the chance, go and see them!

The show was beautiful and breathtaking. Those big Japanese drums are so.... big! They have 3 really big drums, about 1 metre high, and other drums that vary from big to small, to drums that they have hanging in from of them. And the sound of the drums, especially the 3 big ones, you can just feel them when they were played! The drummers were really good and you could see they had lots of fun. They also did funny acts, like 2 drummers who played one at a time and the other trying to interrupt the first, or, after the break, you only saw 2 hands with drumsticks from under the curtain. The 2 hands played, but a few seconds later they went apart further than a set of hands from 1 person could!

And what we didn't expect at all, but silently hoped for came true: dancer and choreographer Isaya Mondori, also the creator of Dadada-Dan, came on stage with another dancer and performed 2 dances. The first time they were on stage they danced a story of a man who tried to cut a tree, but the heart of the tree was a beautiful tayu who tried to stop him. And the second time only the other dancer came on stage and did a dance with a Japanese umbrella (and I am trying hard to remember if Isaya Mondori also performed in this dance). The costumes and susohiki were gorgeous, and the musubi of the tayu was really pretty.

It was a really good show and we had lots of fun. Misuchi and I were the only one in kimono, there were very few Japanese, and I think that the few that were there were family or crewmembers. Everyone was staring at us or asking questions why we were dressed in kimono.

And we had some pictures taken with 2 members of Dadada-Dan Tenko: 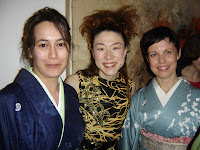 This picture is with Misuchi and Mihoko Umemura.
She said how nice it was that we were in kimono (and did we do it ourselves?) and that she could not put on a kimono by herself. 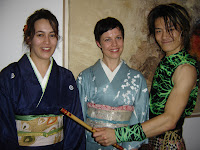 
Pictures and clips you can find here (although in dutch, but it's really clear on what's what).

Misuchi, thank you for coming and for the beautiful haori! I tried it on yesterday when we got home, and it's perfect!
Geplaatst door Kyuukaryuko

Very brave that you went in a kimono.
Were people starring at you both and were there positive reactions?
We'll I think you and Misuchi look very beautiful.

Everyone was indeed staring at us! But it was fun to see that, and friends at the theatre thought we looked really beautiful. Next time when I'm going to someting Japanese, there's a good chance that I'll go in kimono. So much fun!

Thank you for posting ^_^

Yes we had a lot of fun and the band was great, if you have the change go see ^_^

Thank you for the lovely socks, I tried them on today and they are perfect!

you're really lucky to have been able to take pictures with 2 of them ^^
The kimonos are so pretty !!! you guys look great in them !!! (I should try to do the same if I find a nice kimono ^^ lol)
I went Yesterday night to their concert, and it was MAGNIFICENT !!!! SUBLIMISIME !!!!!! If I have the chance to go see them again I'll totaly will go without any esitation !!!
My only souvenir is the big poster that I managed to heve signed by ALL the dadadadan Tenko artist X3 !!!